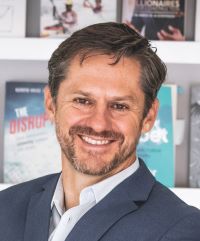 Why CEO’s and their people work with Jacques

Served as Financial Director of a subsidiary of a listed concern (Medi-Clinic) at the age of 28, founded 5 start-up companies and one franchise, Board Member of various companies. Started Centred in 2012 to help CEO’s and their people succeed at business and in life. Jacques has facilitated more than 200 life-changing LMI programmes.

To get his client companies to the next level, Jacques focuses on two things with clients:

In April 2017 Jacques founded The Business Book Club . A non-profit organisation with the purpose to provide knowledge to Those who do not have access to it, by collecting books and donating it to libraries in less priviledged communities.